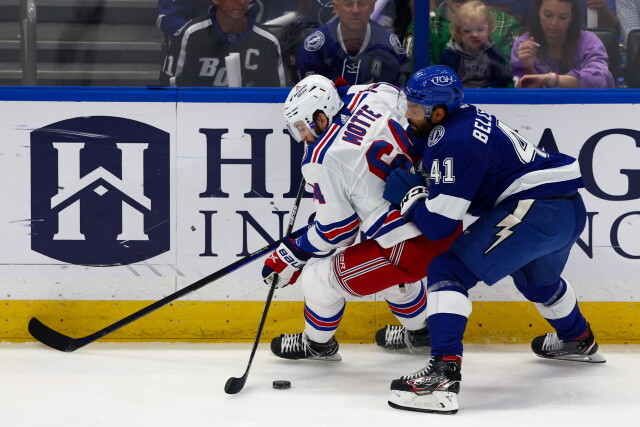 Jake McCabe out for close to three months

Blackhawks prospect Jalen Luypen will be out for 14 to 18 weeks after having left rotator cuff surgery.

Poolman back on the ice

Chris Tanev should be ready to go

Wes Gilbertson: Calgary Flames GM Brad Treliving on defenseman Chris Tanev who had offseason surgery on his shoulder: “We anticipate he’ll be ready to go at the start of camp and then we’ll monitor it throughout … Obviously, the focal point is Game 1, and we expect him to be ready to go.”

Eric Francis: Tanev hopes to get clearance by team doctor in the next week.

Another players have been signed to a PTO yesterday. The Los Angeles Kings have signed Nate Thompson to a PTO. Daniel Sprong has signed with the Kraken to a PTO. One of them deserves to be in the NHL. The other one doesn’t. Guess who is who. pic.twitter.com/ULjY0gtt28

Frank Seravalli: The Ottawa Senators have signed forward Tyler Motte to a one-year contract worth $1.35 million.

Cap Friendly: With a 21-man roster – 12 forwards, seven defensemen, two goalies and one player on the IR – the Senators now have $5,690,119 in projected salary cap space.

Graeme Nichols: “Motte is a good defensive left winger who has played centre. Gives Ottawa a quality depth option. If he can play centre, he would be an upgrade on Gambrell. He affords the Senators the opportunity to be patient with Greig (Belleville) unless Formenton’s situation remains unclear.”