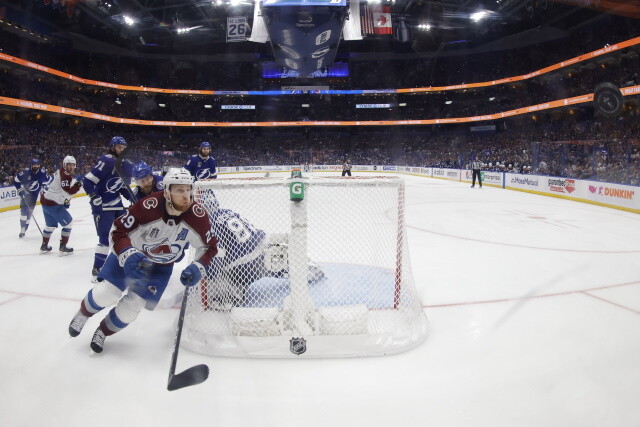 Sportsnet: Elliotte Friedman on the 32 Thoughts Podcast on MacKenzie Weegar, who has a 12 months left on his contract, and is speaking extension with the Calgary Flames.

“So on the Flames golf match on Wednesday, he mentioned they’re engaged on one thing and hope to get it completed.

I’ve a sense that one thing goes to be round Hampus Lindholm‘s extension in Boston. When you look at when Lindholm was traded from the Ducks to the Bruins, he signed for eight years at $6.5 million. I think that’s sort of the final space the place the Flames and Weegar are taking a look at right here.”

A Nathan MacKinnon extension could possibly be coming quickly

Sportsnet: Elliotte Friedman on the 32 Thoughts Podcast on Nathan MacKinnon and his contract extension talks with the Colorado Avalanche.

“Nathan MacKinnon. One of the issues we’ve talked about on the Podcast. The chance turns into the highest-paid participant within the NHL. Got an opportunity to ask him about that right here. The Pat he’s referring to is his agent, Pat Brisson.

MacKinnon (through the NHL/NHLPA media tour in Vegas): “You have to ask Pat. I don’t know. I’m hoping that we’ll get it done pretty soon. Colorado is the only place I want to be. That’s for sure. So, love Joe, CMak. Those guys are great. It’s just a little business. Sorry to not answer your question but I’m not going to answer that question.”

Friedman: “But what you’re saying to me is, there’s nothing to worry about here. That this is on the path to getting done.”

MacKinnon: “Ya, totally. Myself, Pat, the team, we all have good intentions. There’s no bad blood or anything. It’s just, it’s been a longer process than I thought I guess. In my head, first day it’s eligible to be done but things don’t work like that I guess. But it’s okay. I think it should be done shortly I’m hoping. That’s my goal. If not, I guess, feeling good, so whatever happens, happens.”