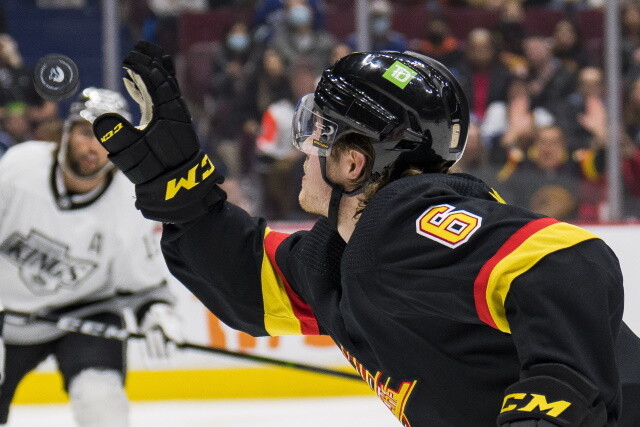 Cap Friendly: The New York Rangers have signed ahead Julien Gauthier to a one-year cope with an $800,000 cap hit.

Canucks Communications: The Vancouver Canucks have signed ahead Brock Boeser to a three-year contract with a wage cap hit of $6.65 million.

“We’re very happy to have worked out a new deal for Brock” stated Allvin. “He is a very talented player and has been an effective goal scorer throughout his entire career. We look forward to seeing his game progress in the years to come. Now that his contract is in place for three seasons, Brock can shift his entire focus to his on-ice performance.”

Puck Pedia: Boeser will get $6.65 million every season. The third 12 months of the deal he’ll have a modified no-trade clause.

Rick Dhaliwal: Jim Rutherford after the signing: “A good compromise was made by both sides. This negotiation was hard, you had the qualifying offer, it was hard to find a middle ground but we did and we are very happy. Émilie Castonguay did a really good job for us.”

Joe Smith: The Tampa Bay Lightning have re-signed ahead Nick Paul to a seven-year contract with an AAV of $3.15 million.

Defenseman Brent Seabrook will ultimately be positioned on the LTIR, which can go away them with $1.74 million in area.

Nick Paul, signed 7x$3M by TB, is a defensive third line centre. Had a fairly good postseason with the Bolts, together with some memorable objectives (however don’t anticipate an excessive amount of scoring). #GoBolts pic.twitter.com/23MBbVLrnF